Reading-wise, I'm saying goodbye to 2017 a bit disappointed. I had pledged on the Goodreads 2017 Reading Challenge to read 40 books this year, and that's doable in a normal year, but 2017 didn't turn out to be a normal year and I only had time to read/listen to 22 books.

I like to mix up my reading with fiction and non-fiction, with the fiction divided between mystery and general fiction.  This year half of my completed books were non-fiction and four of those were autobiographies.

Fiction: IQ and Righteous, both by Joe Ide.  This is a two-fer because both books are by the same author and are his first and second books in his new mystery series.  Don't miss these!

Book that made me laugh my ass off: When You Are Engulfed In Flames by David Sedaris.  Honorable mention goes to Human Resources by Bill Fitzhugh.

Book that touched my heart: Nomadland: Surviving America in the Twenty-First Century by Jessica Bruder. A moving book about a growing and serious trend.

I'm looking forward to 2018, and am pledging again to read at least 40 books in the upcoming year. You can always check my progress in the bar to the right of the blog.

Currently I'm reading Stone Cold Dead by James Ziskin and The Rooster Bar by John Grisham.  On my 2018 list already are more by James Ziskin, a couple by Matt Coyle, and definitely Leonardo da Vinci by Walter Isaacson.


Posted by Sue Ann Jaffarian at 7:21 AM No comments: 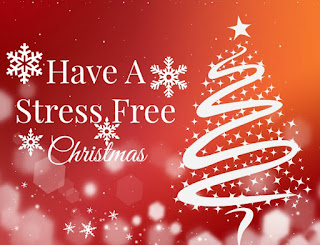 As I wrote back in 2015, I keep my Christmas celebrations very simple and have for years.

But this Christmas has been even more simple and stress-free. You see, this was the first Christmas I have not been facing down the barrel of a writing deadline - or two.

I went to parties. I did my shopping, sent off packages. Watched holiday movies, and planned outings with friends. All without guilt. What a concept!

The only fly in the ointment was a knee injury at the beginning of the month that kept me from one party and from doing a few more active things. But the knee is much better, and I've cast aside the cane to resume festivities.

Today is a Christmas brunch with dear friends. Christmas Eve I'm going to a party. Christmas Day I'm going to make myself a nice meal and relax. And write. But not because I have to. Because I want to. And I will enjoy the process more because there won't be a gun to my head.

Everyone have a lovely Christmas! 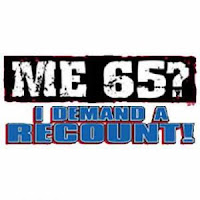 This week on Life In Pieces, one of my favorite sitcoms, one of the characters turned 35 and was having a meltdown over it, especially when a cake arrived at the dinner table with the number candles reversed to say 53.

Yes, 65, that magic year when you have to sign up for Medicare, and retirement becomes a real possibility. It's an age when you're eligible for all of the senior menus and discounts.

My mother died at 52 of heart disease. My father passed away at 79 from a stroke. If you average their ages, it comes out to 65.5. This birthday, I'm smack between the two ages when they died. My brother died in his 60s due to liver disease. It definitely makes me pause to reflect, even though I'm pretty healthy for an old broad. 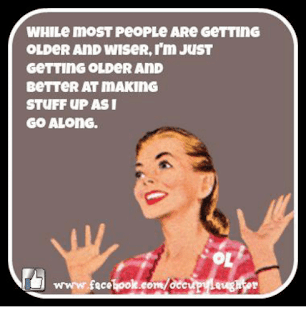 But I digress, which, by the way, is part of getting old. As I pause on the brink of turning 65, I don't want to bemoan lost years, growing old, or creaky knees. I want to celebrate what's ahead of me, and when I turn my head away from the past and focus on the future, I flutter with excitement.

As most people wind down, I'm starting a new adventure. Soon I'll be retiring and making my goal of becoming a wandering writer a reality. I have places to go and people to meet, as well as connecting with long-time friends scattered around the country.

I have about 26 published novels under my belt. Time to quit and rest on an impressive body of work? No way! In the next two years the plan is to write and publish at least 4 more novels.

I'm so excited, I could widdle!  By the way, another problem with getting older.

A Modern Grapes of Wrath?

I recently finished reading Nomadland by Jessica Bruder. This book was recommended to me because I'm planning on hitting the road on a continuous writing and book tour when I retire.

I highly recommend Nomadland, but not for the reasons you might think. 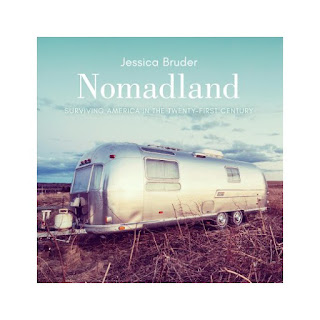 This book did not chronicle the life I expect to live in a well appointment and fancy camper van. Instead, Nomandland tells the story of a modern exodus and shrinking middle class, something on the minds of most of us who follow the news and worry about the future.

Author Jessica Bruder meets, follows, and interviews people who, for the most part, once lived in nice homes and had good jobs, who found themselves broke and homeless due to the economy, health care costs, and layoffs. They could no longer afford to keep a home or an apartment and job prospects were slim, so they gathered up what money they had left and hit the road in a variety of wheeled domiciles. Some moved into RVs, trailers and vans, also known as wheel-estate. Others lived out of their SUVs and cars with no facilities.  Most of the people she met during her research were over 60 years of age, living off meager Social Security, sometimes as little as $400-$500 a month, after losing everything in the economy crash of a decade ago.

For work, many of these modern nomads go from job to job. They have become itinerant workers driving from seasonal job to seasonal job, like the Amazon Camperforce, during which these workers walk as much as 15-20 miles in 12 hour days on concrete floors filling orders for the holiday season, while living in their homes on wheels in freezing temperatures. Others migrate to the sugar beet crops or take on camp hosting positions. These are not glamorous jobs. They are physically demanding, low paying, and have zero benefits. But it is all most of these people have to supply food and shelter. More than once during the book, I was reminded of Grapes of Wrath by John Steinbeck.

This book hit close to home. You see, when I was in my late forties I was laid off from a job due to a merger. I did find another fairly quickly, but a couple of years later found myself unemployed again when that company was sold. That time I wasn't so lucky. I was out of work six months, taking on part-time short-term gigs when I could while I looked for full-time work. By the time I landed a job, my savings was gone and my credit cards were maxed out. My new job was in a truly awful and abusive law firm for about half of what I was making before, but it was enough to keep the wolves from the door, barely. A year later I got another job in another law firm for a bit more money. It was another awful job, but more stable and I moved to Los Angeles from the suburbs to cut down my commute. Three years later I got another job offer and gave notice, but that new job fell through and I was left with nothing again. For six months I took low paying temp jobs. I cleaned apartments for people. I was just starting to get published when this happened, so while I wasn't making any royalties yet, I was, at least, getting some meager advance money. I hadn't quite recovered from the layoffs of earlier, so when this hit, I had no choice but to declare bankruptcy.

But all was not bleak. I wrote, worked hard at anything that could pay the rent, and held myself together. Some friends knew of my hardship and loaned me money.  Finally, I landed the job I have now and have held for over twelve years. It's a great job in a great firm. It has allowed me to rebuild my paralegal career and become financially stable again. Loans were all paid and now I'm looking forward to retirement. I won't be flush with cash when I retire, but I won't be in the same boat as the people in Nomadland. And thanks to my writing career, I won't have to work itinerant, physically difficult jobs.  But I have felt their desperation.

While often pretty bleak, Nomadland also reflects on the strength and strong spirit of this wandering population. Long lasting friendships are built on the road and fluid communities come together. Many see it as a means to eventually re-establish themselves in the mainstream population. Others come to enjoy and thrive on the freedom and independence that comes with having few encumbrances. Some never manage to shake off hopelessness and despair. None consider themselves homeless.

After reading this book, I wondered,  had I known living on the road was a possibility when I was going through my hardships, would I have chosen such a life? I'm choosing it now as a fun adventure after retirement, but could I have tackled such an undertaking twelve-fifteen years ago when I hit bottom? I'm not sure I had the fortitude then to do it, so I take my hat off to these brave people.

As the middle-class continues to be squeezed out by government policies and an unfriendly economy, I predict we'll see more and more of these modern nomads on the road. It has become the new reality for many.

Posted by Sue Ann Jaffarian at 8:49 AM 3 comments: