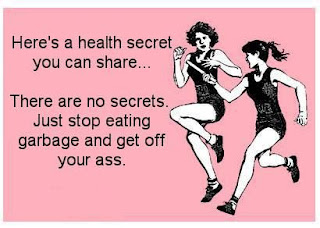 This week I had my annual physical, which is really a misnomer since my doctor reminded me that I hadn't had an annual physical since early 2015.  Anywhoooo, this physical was prompted by a couple of things:

1) I've been feeling like crap most of this year. Nothing earth shattering, just generally yucky, mixed with body aches, dizziness, nausea and headaches, all of which I pinned on stress.

2) The doctor noticed I hadn't had a physical in over two years when I went in two weeks ago to finally complain about all of the above, and promptly squeezed me in for one.

In the first visit the doctor diagnosed me with vertigo and recommended I take Bonine, an over-the-counter motion sickness medication, for a while and see if it would go away.  I'm pleased to say the Bonine worked. I take a half tablet in the morning and half at night, and after next week may stop it and see if all is good again, or just take it as needed.  I gotta say, going through the day without being dizzy and nauseous is life changing.

In the second visit, the doctor examined me head to toe, drew blood, and made me pee in a cup. He also scheduled a couple of routine tests I still need to take, like a mammogram. At the end of my visit, he told me I have high blood pressure and prescribed medication.

Now here's the thing. When I fussed over the medication, because I hate taking drugs, my very sweet doctor looked me in the eye and said something like this:

If you manage your stress, eat healthy, and get regular exercise, you might be able to go off the meds.

Huh? My eyebrows shot up in disbelief, and he caught the gesture, following up with this gem:

Barring anything that crops up in the tests, there is nothing wrong with you that you can't fix yourself.

Hmmmm. Nothing I can't fix myself.

I'm not exactly a do-it-yourselfer, but I know a personal challenge when I hear one. We've all read about people who were sick, some near dying, and then recovered when they changed their lifestyle. Now I was faced with that forked path: do nothing and continue to gain weight and feel yucky, or get back to regular exercise and a healthy diet. Not that I do recreational drugs or drink much alcohol, but I sure could exercise more, lose weight, and stop binge eating under pressure.

Like he said, barring test results, I'm pretty healthy, and feel very lucky about that at my age. And blood pressure can be managed. He wants me to take my meds, and monitor my blood pressure three times a week and journal it. When I go back around the end of the year for a follow-up, he'll decide if I'm on the right path for being medication-free again.

I have about 500 days until I retire and hit the road in an RV. I certainly don't want to be sick when I do it, or have a health issue that prevents it.

And I love a good challenge...

Posted by Sue Ann Jaffarian at 7:48 AM 2 comments:

2017 has been a hard year for me so far, physically and emotionally. Basically, it's felt like I've been stuck on a Tilt-a-Whirl for the past nine months.

I overextended myself with obligations, all of which I met, but it about killed me with stress to hit them all and do it well. But this past Monday I turned in the final edits of my final book under contract, so I no longer have any hard publishing deadlines. I also completed my last big time commitment for the year, and the extra work they piled on at the day job will be lessening.

Physically, my body is getting back to normal. Aches and pains, including those scary chest pains from June, caused from too much stress have diminished and hopefully will stop altogether. I was diagnosed with vertigo and am taking medication for it, which has stopped the dizziness and nausea I've had for the past several months. Even the pounds I gained from stress eating junk food are beginning to leave the building. Everything is looking up.

As for my retirement plans, I had a monkey-wrench thrown into those too this year. I'm still on track, but have learned I must be patient about getting my RV, and have put that off until I'm much closer to my actually retirement date. All in it's proper time.

There are three months left in 2017 and I intend to finish the year strong.

Finishing two short stories, one of which I've been working on forever!
Finishing up a non-mystery novel which is almost finished.
Launching The Novel RV imprint for future self-published work.
Re-releasing The Ghost In The Polka Dot Bikini.
Get back to regular exercising and better eating - already in progress.
A lovely and well-earned vacation in Hawaii around the end of October.
Getting the tattoo I've wanted ... it's my 65th birthday gift to myself.
Saying NO to requests that suck up my time and energy needlessly.

That last one is a biggie.

What do Michael Jackson and I have in common, besides liking to hang out in our jammies?  We both had/have vitiligo.

Vitiligo is an autoimmune disease that causes pigment-producing cells to die or stop producing melanin, causing patches of the skin to become white or lighter. It is thought to be caused from stress, trauma to the skin, other underlying disease, or even be hereditary.  It's not painful or infectious, just unattractive. My brother had it on his hands and arms. I have it on my neck and in small patches on my arms. Mine could have been caused by stress-induced hives on my neck, which damaged the skin, but we're not sure.  It started about six years ago, and it's not a bad case, and because I'm white, it's not immediately noticeable.

A few days ago I read about a young male model named Curtis McDaniel who has vitiligo and is out there becoming a successful model. In the article he talked of being bullied in school. Now he's strutting his stuff with confidence. And why shouldn't he?

Another model with vitiligo making big waves is Winnie Harlow.

But this blog isn't about vitiligo. It's about things that make us different, that defy the normal definition of beauty, and challenge us to overcome such challenges and strut our stuff because we are beautiful.


We are all beautiful.

If you are an American Ninja Warrior fan, as I am, then you know that Kevin Bull is one of the premiere American Ninja athletes. Kevin also has alopecia, another autoimmune disease, but this one attacks hair follicles rendering a person partially, or often entirely, bald. Kevin Bull uses his disease to bring awareness to alopecia and to build confidence in children suffering with the disease.

Then there's Kechi, a contestant on this season's America's Got Talent. Kechi was only one of two survivors of a plane crash in 2005 in Nigeria and sustained third-degree burns over most of her body. By the way, she sings like an angel and is in the finals of this season's competition.

And, honestly, I'm not talking about myself here. My vitiligo started late in life and by the time it became noticeable, my give-a-damn was already broken. But what if it had happened when I was young? Would I be as accepting of it?  I doubt it.

But maybe the real challenge here isn't with those with noticeable differences. Maybe the real challenge is with those without such hurdles. Those who look at these people and see freaks. Those who are frightened that such things may happen to them, as if they are catching. Over the years I've had two different women approach me and suggest that I get laser or bleaching treatments for my vitiligo. One knew me. One didn't. When I said it didn't bother me, both pressed the matter until I finally told them that if it bothered them, then don't look at me.  I can only imagine what they would say to someone like Winnie Harlow.

Nope, it's all just part of life. Everyone faces different experiences and challenges. A physical difference doesn't make anyone less beautiful. Because real beauty is within. The outside is just the packaging.  I know that sounds like a cliche your mother said to you when you were in high school crying over a few pimples, but it's true. Real and genuine beauty comes from within and shines out like a beacon.

Now if we could just get the whole world to understand that, we might be able to cure a lot of mankind's problems.