To Raffi With Love 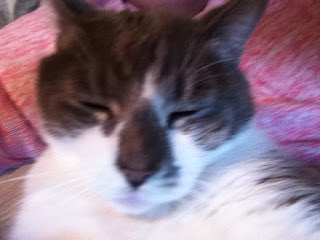 I did something today that I've never had to do before. I had to put a pet down. A beloved pet that had been a part of my life for many years. He was a common white and gray short haired little devil with boundless energy and a stubborn disposition. He took crap off no one, including me, and definitely not my other cat, B.

A few months ago Raffi started vomiting and lost a little weight. I took him to the vet and the exam and all his blood work came back normal. The vet believed it was simply a sour tummy. I tried all kinds of pet food, some he kept down better than others. Once the vomiting stopped, he rallied, and seemed more like his old self. For the past few months it was like that. Good days and bad. I worked hard to get his weight back up, but it kept dropping and at a rapid rate. Four months ago he weighed 14.5 lbs. Today he weighed 8.7 lbs. I took him back to the vet today because of the weight loss and because Raffi developed diarrhea and was having difficulty walking from weakness.

This morning the vet found a large mass in Raffi's abdomen - cancer. It wasn't there a few months ago, so it was very fast growing and now the size of an orange.  I felt it myself today. There was nothing to do except try to keep him comfortable for the little time he had left, and the vet said he had very little time left. I made the decision to put him down. It wouldn't be fair to him to try to keep him alive. His quality of life was gone and he was miserable.  Raffi was 13 years old.

About 12 years ago, I adopted Raffi and B from a young couple who had just graduated from UCLA and were going their separate ways to different grad schools. When they got here, B went immediately under the bed and stayed there for a month, coming out only at night or when I was gone for food, water and the litter box. Raffi, on the other hand, hopped out of the carrier and investigated every inch of my apartment, finally deciding he liked his new digs. I remember the first morning after B and Raffi arrived because Raffi scared the crap out of me by waking me up with a wet nose in my face. It would be the first of many mornings he would wake me up that way.

Raffi was a big cat. He was tall and long and carried his 14.5 lbs like a prowling jungle cat. He loved to race through the house, bouncing off furniture, even up to just a few months ago. He also loved to torment B and he'd get angry with her if she didn't want to play. All the destroyed furniture in my apt. is because of him. He was a pistol, pure and simple. He was also incredibly loving and cuddly to both B and me. He was our protector. Some nights I'd wake up to find B snoring next to me and Raffi at the end of the bed alert and standing guard over his two girls.

He was also very social. He didn't mind strangers one bit and loved it when I had company.  He made friends with everyone who came through my door, including repair men, and would flop on his back and invite them to rub his tummy. Unlike B, who hides even when I Skype.

There wasn't a single day you didn't make me smile or laugh. You brought me comfort when I was blue and kept me company during my long hours of writing. You loved both B and me unconditionally. Who's going to keep us in line now? 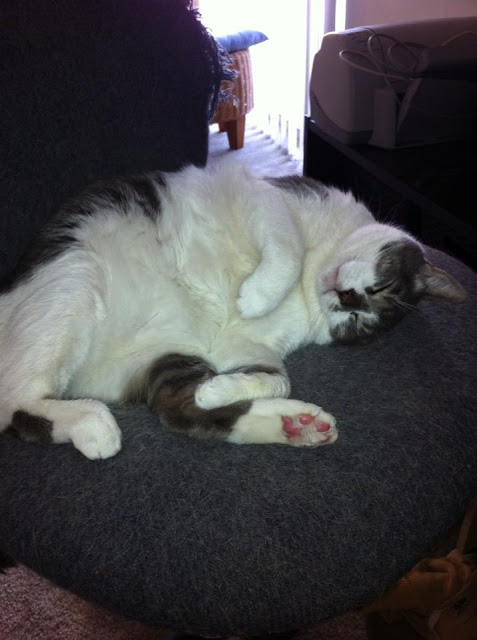 Posted by Sue Ann Jaffarian at 9:56 AM 9 comments:

Love Me Some Trevor! 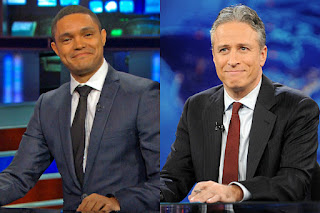 I'm one of those people who believe change is good. Change is healthy. Change is invigorating. Then Jon Stewart announced his retirement from The Daily Show and I attired myself in sack cloth and ashes and moaned audibly.

Now, several months into The Daily Show with Trevor Noah, I gotta say,

Trevor Noah has brought a freshness to the show. It has a more youthful spin that even my 60+ years appreciates. It's like an old solid house getting new paint and landscaping. My only concern at the beginning was that South African Noah would not be able to present US politics and cultural craziness with the same heart and laser hot sarcasm as an American-born host.

I was wrong.  Dead wrong.

Yes, you heard me. I was wrong. Noah's news stories, whether they be about the presidential race, gun control, racism (who better than a South African to talk about that, huh?), or health care, are point on, and his stories on international news are just as biting.

Although sad to see some of my favorite Daily Show correspondents leave the show along with Stewart, I love the new correspondents who joined the remaining cast. It's a great mix.

Bottom line: Trevor Noah is funny, intelligent, congenial and cute as a button!

I always had the hots for Stewart. Not so much for Noah. You see, he's 30 years my junior. Instead of getting nasty with him, I want to pinch his cheeks and cheer him on like a proud auntie.

You got this, Trevor!

Heavy on the Glam, Light on the Bullshit

Even though I consider Crocs a fashion accessory and seldom wear makeup, I'm a girlie-girl at heart. People who have only known me over the past several years don't know that there was a time when I wore stockings and heels and silk dresses, even cocktail dresses. I never went without makeup, especially mascara and lipstick, and had acrylic nails painted blood red. Even my bras and panties matched. It's true.

Now I prefer comfort over fashion. Call it age. Call it laziness. It works for me at this stage in my life when most of my free time is spent hammering away at a keyboard writing books, dressed in yoga pants and t-shirts, without shoes and a bra. This is also true.

I've been heavy most of my life, so finding nice clothing has always been a chore, especially when I was younger. I hate to sew, but I used to make a lot of my clothes because I couldn't find any to fit except matronly tents with big-ass prints. I even made a fully-lined trench coat once that came out pretty good.

Now it's not that difficult to find fashionable clothing in plus sizes, at least if you shop online. There are tons of great plus-size retailers on the Internet, but few physical stores that carry plus sizes. Which is surprising since most American women are a size 14 or greater. I guess they don't want our money. And, even if a chain store CLAIMS to carry plus sizes in their stores, they won't carry them in all of their stores, just in a couple, and the stores that don't have plus size departments get very snooty and bitchy if you asked a sales rep where it is (*cough* Macy's *cough*). And even if department stores DO have a plus size department, generally it is located next to housewares or somewhere in a corner away from the "cool stuff."

I have a plethora of real-life shopping experiences that have happened to me over the years that would curl your hair, some of which have made it into my Odelia Grey books. Most of my clothing is bought online because I don't have the patience for brain dead sales people and stores that don't respect me and my time.

This last week Project Runway (which I've watched from its beginning because I am a girlie-girl at heart), crowned its first ever plus-size designer, Ashley Nell Tipton. And for the first time ever, Project Runway featured a plus-size collection on the runway during Fashion Week.  Ashley's collection was fun, colorful, and very feminine. It even showed skin. If I were younger, I'd be saving my pennies and lining up for her clothing ... um minus the headgear.

Sadly, Ashley's win came with a lot of criticism from haters and critics. Many online attacks claimed that Project Runway chose Ashley over the other designers simply to make history instead of picking the best designer.

I watched the entire season. My favorites were Ashley and Edmond Newton. In the end, after the fashion show, it was clear to most watching that the two best designers in the show were Ashley and Kelly Dempsey. The judges said Ashley's collection was feminine, wearable and cohesive, and could be worn by women of any size. Ashley Tipton may have sent plus-size models down the runway, but the designs could be worn by women of any size. Not so of the other 3 finalists.

Over the 14 seasons of Project Runway, they've had several challenges that involved designing for the "everyday woman" which included some that were plus-size. I would sit on my sofa and growl as the snippier and less mature of the designers complained that they hated the challenge because it wasn't "their thing" or it grossed them out.  During those shows, I'm sure my neighbors heard me shouting, "Oh grow the fuck up!"  They probably thought I was screaming at a boyfriend or kid, of which I have neither.

Early in this season's competition (Episode 5), with Ashley fresh off not one but two challenge wins, many of the other women in the competition ostracized Ashley and tried to throw her under the bus and get her kicked off. I'm not sure why. Throughout the competition, Ashley was helpful, pleasant, a good sport, and charming. Maybe these other women sensed she was a talent to be reckoned with, or maybe it was just the age-old prejudice against weight, or thinking that bigger women are easy prey. Heidi Klum made a comment about it and even one of the judges referred to it as a "bitchfest." Ashley was hurt and crying and I cried right along with her, remembering similar incidences in my life. Some things never change.

Ashley Nell Tipton, my dear girl, you have a very successful career ahead of you, and women of all sizes are going to be clamoring for your clothes. Just do me a favor: make the skinny chicks wait in the back of the line.