Fan Clubs - Not Just a Bunch of Hot Air 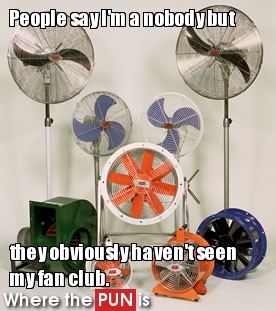 By the way, this is not my Facebook author page or my Facebook personal page. This is a group in which members post and discuss books (and not always my books) among themselves.

The Sue Ann Jaffarian Fan Club was started several years ago by Cyn Rielley, an avid reader and fan of my original series, the Odelia Grey mystery series. It was originally called The Odelia Grey Fan Club. From there it morphed into the Sue Ann Jaffarian Fan Club as I started writing additional series. Now it is administered by Cyn and my niece Lindsay, both of whom live in Massachusetts.

I am so very proud of this fan club! And I don't say that because it has my name on it. Although not all 1000+ members are active in it, there is a lot of lively discussion about books and writers. There are even quite a few other writers among the membership, as well as library professionals, book retailers, and a few reviewers. The membership also spans the globe. While most members are from the US and Canada, the club also contains members from Australia, the UK, Greece, Japan and France. Don't you just love the internet?!

But the most important thing is, these people are READERS. Many voracious. And while many probably only read the softer side of mystery fiction, most read a wide spectrum of books, both fiction and non-fiction, adult and YA.

One of the features of the club is our monthly guest authors. Each month, we invite another author to showcase his/her books and writing life. Again, the style of books varies from cozy to hard boil, with most falling somewhere in between. 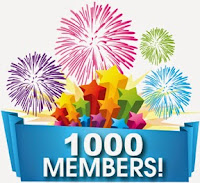 Except for the occasional give-a-ways when I guest blog, the club is also the only place I hold contests to win copies of my books, or other fun items.

Other writers often ask me about the club. They want to know how to get one of their own up and running. So here are some tips:
When Cyn first started the club, I remember being somewhat embarrassed by it. I mean, a fan club, with my name on it. Geeeezzzz! Now it is one of the things of which I am most proud and thankful for.
Posted by Sue Ann Jaffarian at 6:04 PM 2 comments:

But It Is My Circus 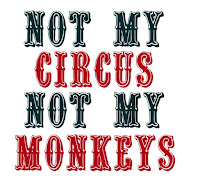 One of my favorite funny, yet often appropriate, sayings is "Not My Circus, Not My Monkeys." For those who need an explanation, it basically means:  this does not concern me; none of my business; I don't have a dog in this hunt.

But I do have a dog in this hunt. And by hunt, I mean what happened this past week in Charleston. I am not African-American. I am not a church-goer. I don't live in Charleston or anywhere on the East Coast.

But this is definitely my circus. And all of mankind are my "monkeys," even the sick bastard who shot those lovely people gathered together for a Bible study.

I am a human being. I have a great love for all living things, no matter their species, race, gender, sexual preferences, and beliefs. When I first heard about the shooting in Charleston, I couldn't wrap my head around what had happened, it was so horrific. The same thing happened when I first heard about the bombing of the Boston Marathon. My initial response was: This can't be true.

Sadly, it was true, both the bombings and the shooting at Mother Emmanuel Church. Just as Sandy Hook was true and the shooting at Fort Hood and the movie theater in Colorado, to name just a few. More and more I am called upon to wrap my head around senseless violence, both overseas and here at home. Both pain my heart and bring me to tears, but especially the horrors inflicted here at home by our own.


My monkeys are killing other monkeys in my barrel.
And I feel helpless to stop it.
I weep for my helplessness as much as I weep for those killed.

Hatred is learned. The young man who took those lives in Charleston did not come out of the womb ready to shoot African-Americans and with a desire to start a race war. This isn't like me hating okra. Dylann Roof had to learn hate of that magnitude. Someone indoctrinated him into such vile beliefs and emotions. Either at home, or through groups who prey on disenfranchised young people, radicalizing them and filling their heads and hearts with pus and gangrene for their fellow mankind.

We hear about radicalization a lot on the news with regard to ISIS promoting across the internet to recruit young adults into their cause. But what about hate groups here at home? They are doing the same thing. In a time when we should all be embracing unity, these various groups are going after our young and turning them into a homegrown army of suicide bombers.

Roof may have confessed to the killings at Mother Emmanuel, but I sure hope the investigators continue to dig deep into his background and ferret out the sick evil bastards who filled his head with such hateful propaganda in the first place, and maybe even gave him his marching orders to take out the charismatic and forward thinking Rev. Clementa Pinckney.

Yeah, I said it. I personally do not believe this 21-year-old cracker decided on his own to drive for 2 hours to that particular church to take out random people. Not for a minute. The head of the snake is still out there and we owe it to ourselves and our future to investigate that to the fullest.

Forgiveness is not just a Christian principle. The inability to forgive causes emotional cancer, no matter your beliefs. I join the families of those slain in forgiveness for what was done.  They showed great strength of character addressing Roof as they did.  But forgiveness does not mean forgetting. And it does not mean we move on without change or without looking deep into the root of such carnage and excavating those roots.


Well, dammit, it is our circus and our monkeys!

Even those of us not involved personally in this tragedy need to become activists in spreading tolerance and love and acceptance and in stamping out ignorance. We need to raise our voices to fight the cancers plaguing our country. Only then do we stand a chance of beating the growing hate and violence. By remaining silent, we give passive consent. We are essentially saying: not my circus, not my monkeys. And that is unacceptable.


Let's honor the memory of these people,
who died because of hate,
by living in love and tolerance for one another. 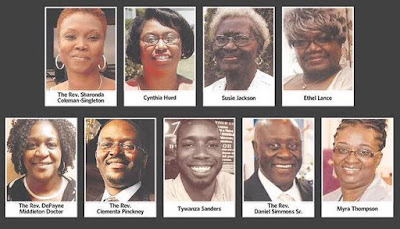 Posted by Sue Ann Jaffarian at 12:16 PM No comments:

Ode To My Jammies 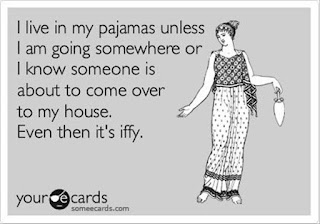 Today I said goodbye to a very dear and old friend - a cotton nightshirt that I've had for at least 20 years and which has seen me through many a book manuscript.

Most of the time, I write in jammies and my preferred jammies are knee-length cotton t-shirt style nightshirts with a v-neck. I prefer plain solid colors like gray or blue or pink, no cutesy designs need apply, not even kitties. And I prefer them very baggy. If I'm not wearing one of these long t-shirts while at the keyboard, I'm wearing capri-length yoga pants or cotton knit shorts and a regular t-shirt. But you see the pattern here: t-shirts and soft natural cotton material.  Oh, and no bra, that's the most important thing here. No. Bra.

Now you know why I don't take my laptop and write in public places like libraries and coffee shops like a lot of my colleagues. I can't concentrate in those places. One of the reasons I can crank out so many books in such a short time is my ability to concentrate for long periods of time with the focus of a laser beam. I can't do that in public. The second reason I don't write in public is that I'd have to get dressed. Even in the middle of a heat-wave, I will not abandon my hellish 3rd floor apt. and trek to a public place with AC. I'd rather aim the fan at me and the computer and keep plugging away.

The jammies hitting the skids today are (or were) purple. They've been washed over the years until they are now a dull lavender. There is a star over the chest with the words Make A Wish under the star. I've made a lot of wishes in those jammies. The front of the shirt is dotted with spots from splashed bleach and bathroom cleaners. There's even a few permanent food stains here and there. The three-quarter sleeves are threadbare at the elbows and torn at the shoulders. There are even tiny holes in the fabric from the cats laying on the shirt and kneading with their claws out. This poor item of clothing is even too beat up for me to wear anymore while home alone.

The purple night shirt has served me well, keeping me comfy during hours of writing and hours of TV and hours of sleep. I feel I should put it on an ice floe and set it out to sea with great ceremony. But we don't have ice floes in Los Angeles. I could burn it and scatter the ashes somewhere significant, but that might be considering littering.

No, in the end it will go on to live yet another chapter in its very useful life. I will wash it and use it to line B's bed.  She's probably the one who made the tiny claw marks in it anyway.

In Search Of A Theme Song

Every time I turn a novel or novella into one of my publishers, I post the video of Queen performing Another One Bites The Dust.  Today was one of those days. I turned in THE GHOST OF MISTLETOE MARY, my 3rd Ghost of Granny Apples e-novella due out this holiday season from Penguin.

I can't remember when I started posting this video to mark the finish of books, but it's been going on for several years.

First of all, I love the music of Queen and I happen to like this song. I've been in a hamster wheel of book production for about ten years now and every time I finish a novel, I can cross that contract off as fulfilled and move on to the next book, so the song, Another One Bites The Dust, seemed appropriate.

The few times though, I wondered if maybe I was sending the wrong message by using this song. It almost sounds as if I'm checking chores off of a To Do List.

Another chore bites the dust...

See what I mean?

Trust me, I think a lot more highly of my writing than I do of shaving my legs. If you don't believe me, just check for yourself the next time you see me in person.

Then again, maybe I should be seeing Another One Bites The Dust as the signal of another piece of fiction being added to my growing body of work. Kind of like adding another candle to a cake to signal the advance of age.

When I was a kid, Sheriff John would sing Put Another Candle On My Birthday Cake. Maybe my new end of book song should be that tune but with the words:


Put another book in my bibliography...
I finished another today!

So for now Queen will have to do the job.

Posted by Sue Ann Jaffarian at 6:52 PM No comments: