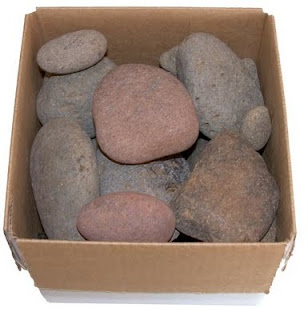 An Amazon reviewer recently called my Odelia Grey character "dumber than a box of rocks."

I'm defending rocks on Criminal Minds today.
Posted by Sue Ann Jaffarian at 5:59 AM No comments: Links to this post 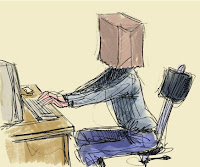 I love the internet. I use it all the time for fun, for my writing and definitely at my day job as a paralegal. I would be lost without it.

As we all know, the internet also has its dark side: child predators, identity theft and annoying spam, just to name a few. But lately something has really been bothering me and that's the use of anonymity as a weapon.

I talking about cyber cowards.  And you know who you are...

Years ago when the internet first started getting popular, very few people used their real name. They protected their privacy behind user names that sometimes displayed their interests or locations or even their baser nature. Now with Facebook and other social media so common, most people use their real names when conversing with others. At least most of us who have nothing to hide.

The handle of Carlos Danger springs to mind. For those of you not keeping up with the news, that's the Twitter handle of Anthony Weiner, the politician who can't seem to keep his pecker off the internet and was even willing to destroy a promising career and his family for the thrill of showing his privates to women online.

But my beef, at least not for the purposes of this post, although I do think Weiner is a weenie, is not about Weiner, but about those folks who throw out rude remarks or post hateful comments under disguises or the cloak of "Anonymous."

I am of a mind that most of these people would NEVER make such remarks in person with their identity displayed for all to see. And I'm betting a lot of these people are even "very nice" people in person. There's just something about the shield of anonymity that brings out the nasty in some people, turning them into CYBER COWARDS.

About the only place online where I use a fictional handle is when I play games online. I'm not talking about Words With Friends, but gaming sites where I play backgammon or dominoes with people from around the world, and I've had that account for more than a decade. It is not usual on these sites to have other players attack you when you're winning, calling you unspeakable names that used to be revealed but for years now have been blocked by symbols.  Still, it's abusive and the vicious tone unmistakable. I'd bet my next meal that if I was playing that person face-to-face over a physical backgammon board, he or she would be congenial and a good sport. BTW, if you're losing, they're abusive, too.  It's like they feel the internet is allowing them to be the black-hearted, nasty individual they've kept hidden for so many years.

It's especially bad with blog posts. Many bloggers, including myself, have blocked anonymous posts, but go to many of the popular blog sites and you will see people slinging slime and fecal matter out onto the airwaves from behind a protective curtain.  You can even find those Cyber Cowards writing reviews on Amazon. They'll say anything as long as they can shout it from behind a lead curtain where they will never feel the sting of rebuttal or the shame of their hateful words. They hit and run, like bullets from a passing speeding car.

Personally, I never give any credence to comments posted by anyone as "Anonymous," but those people disgust me.  If you have something to say, then, damn it, say it and say it openly and with honesty. Stand up for your view point and be willing to debate it.

If you are too ashamed to hang your real name on something you say online, then you should not be saying it in the first place.

Now repeat that fifty times, then take a deep breath and repeat it another fifty times. Maybe then it will get through to you.

If you are too ashamed to hang your real name on something you say online, then you should not be saying it in the first place.

Twice now, I have actually met people in person who have said very nasty things to me online from behind disguises. I never let on I knew who they were, just smiled as they chatted to my face with charm and wit. But all the while I was thinking: You don't fool me one bit. I've seen the real you.

So come out of the dark all you Cyber Cowards before we drag you out, because you're not as smart and cute as you think you are.

Posted by Sue Ann Jaffarian at 7:26 PM 3 comments: Links to this post