Writers - Are you a slob or a good housekeeper?

I did a lot of housework this weekend, but not all of it was around my apartment. Some of it was on my current work in progress – the next novel due to my publisher in a very short time.
I get asked by a lot of newbie authors how do I manage to keep all my books, characters and series straight. Easy answer – good housekeeping. It’s a necessary evil.  I also hear a lot of newbie authors say they just want to write and expect someone else to do all that cleanup. All they want do it slap the story on the page. After all, that’s real writing, isn’t it?
No, it isn’t.
There is so much more to writing than pounding a keyboard. And if you think your editor, best friend, proof reader, etc. is going to pick up on all the goofs, you’re wrong.  In the last two books I read, I found a lot of errors. One of the books was self-published. One was published by a major NY based publisher. Even some of my books have gone to print with errors, in spite of my and my publisher’s best efforts.
Typos happen. As more and more publishers cut back on their staff, more typos are bound to show up. But what about inconsistencies in the text? That is where the author needs to be doing his/her own housework, long before it gets to print, whether it be self-published or traditionally published.
Here are some tips:
Keep a document containing notes on your characters, including physical description, a bit of back story and personality of each one, even the smaller ones.  If a character has blue eyes on page 7, he/she must have blue eyes on page 230, unless, of course, colored contacts are being used and then those must be accounted for in the text.  This is also very helpful if you bring back that character in subsequent books.  I keep such a file on each and every novel I write and I add characters to it as I introduce them to the book. I don’t count on remembering it later.
Keep a calendar of events as they unfold.  If you write that it’s Sunday when your protagonist visits a witness and then three days later you say it’s Friday, shame on you, you didn’t do your housework. For each book I print out a calendar of the time period covered in the story with large open blocks for the days. Each time something significant happens, I jot it down in the calendar blocks so I can keep track of the time frame. Also pay attention to holidays that might come into play in the book or with the characters.
Not just days, but hours.  If a lot is happening in your book in a very short span of time, like in a day, also jot down an hour by hour calendar. If a character is eating a late breakfast in San Diego, then meeting someone for lunch on the west side of Los Angeles an hour later, you weren’t paying attention to your timeline, not to mention how long it takes to get from San Diego to Los Angeles.  The same goes for getting across town in a high traffic area.  I once read a book in which the protagonist drove from Orange County to Los Angeles in under twenty minutes during the middle of a weekday. I live in Los Angeles. That ain’t happenin’ unless it’s the middle of the night, and even then they would be driving like a bat out of hell, probably with the CHP on their tail.
It’s all in the details.  Be aware of the small and simple details you include. If your character is baking a cake then gets a call and runs out the door, remember the cake, unless, of course, part of the story is the cake burning and a possible house fire. If she has a bad cold, run that cold out, don't magically make the character healthy.
This is stuff that can and will drive readers crazy. And don’t think for a minute they don’t notice such inconsistencies. If there is one thing I’ve learned about loyal readers, it’s that they pay attention to everything.  We want them to be crazy for our work, not crazy with distraction.
Posted by Sue Ann Jaffarian at 3:24 PM 2 comments: 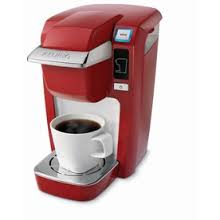 Last December for either my birthday or Christmas (they are both in December), I bought myself a red Keurig Mini coffee maker. It was love at first use!

So here I am 8 months later and the thing sounds like an old man getting up from a chair. And like an old man, the machine needs a couple of tries to accomplish its task.

Arghhh! 8 months and the thing is ready for the junk pile? Really!

Since I had never cleaned the thing thoroughly, I went online and learned how to do it and followed the instructions to the letter ... or to the end of an unfolded paperclip.

By the way, here are the official cleaning instructions on YouTube.

Done in under 10 minutes. Still it won't brew properly. Grrrrr!

Next, I did what I do for all of life's problems, I Googled.  I asked the wise and mighty search engine: what to do if Keurig mini stops working.  And like it always does, Google answered, leading me to instructions I didn't believe for a single minute.  It said I should "burp" my coffee maker.

Yes - burp. As in burping a just fed baby.

Skeptical, but unwilling to give up on my beloved coffee maker, I followed the instructions found on the K-Cup Barista's website.

Who'd a thunk it!

My Keurig is back to new-out-of-the-box working! It's the little Keurig that could!

Last December I also bought myself a Kindle Paperwhite. If it stops working, I am so going to burp it.
Posted by Sue Ann Jaffarian at 8:03 AM 1 comment: