Recently, a friend inquired about my "pledge."

I wanted to feign ignorance, but I knew what she was talking about. She was referencing a blog I wrote in February called Epiphany of Pain about making the commitment to live a healthier lifestyle.

For those of you just joining us, as I've gotten older, my legs and knees have started to complain about my weight. It didn't help that in January I injured the muscles in my right leg so badly I had to hobble around with a cane for some time. Each step echoed my need to drop the weight and give my poor pins a break. It also sidelined me for most exercise.

I'm happy to report that I've been off the cane for about a month now, but still have to be careful of that leg. It's gets as cranky as an old woman whose shoes are too tight. I haven't gotten back into regular exercise as I should, but haven't been a total couch potato either.

Did you know there are amazing exercises you can do sitting down?  And I don't mean changing the TV channel and eating snacks. Here's one of my favorites:


My eating is much healthier too, though far, far from perfect. I've really cut back on fried foods and when I eat them now, they upset my stomach, reminding me of how far I've come. I still enjoy sweets but not as often. There is still the occasional stress binge and pasta or pizza feed, but it's the exception not the rule. I try to stick to fresh fruit and veggies and lean protein, with the occasional coffee cake and carton of Ben and Jerry's thrown in for fun.

So far I've lost 25 lbs. I'm recording it in 5 lb mini goals, not obsessing over single or partial pounds. My sights are now set on the big 3-0.  I had a complete physical recently and my doctor was thrilled with the loss and that I am doing it gradually and without any fad diets or drugs. It's slow, but it's doable and I haven't felt too deprived. And since my last physical, my cholesterol and blood sugar are both lower. They were never high, but the high of average. Now they are both better. 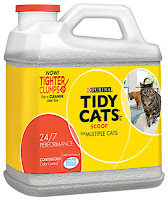 It's also been fun "shopping" my closet. I've been able to drag out long forgotten favorites I haven't worn in a long time.

If you want to know what losing 25 lbs feels like, the next time you're in the market, pick up the large Tidy Cats litter container like the one on the right (it's the one I use at home).

Whenever I get down and think I'm not doing very well, I pick up a full one and think, "Shit! that's heavy! No wonder my legs are bitch-slapping me!" 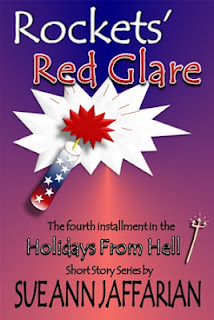 It's here. It's FINALLY here!

After 2 years, I'm finally adding a new short story to my Holidays From Hell collection on Amazon.

Rockets' Red Glare has the Bowen clan gathered together for their annual Fourth of July barbeque. Everyone's there, including Clay Carlisle, Zelda's new boyfriend. Zelda is always nervous introducing new people to her dysfunctional family, but Clay seems to be handling them like a champ, until Zelda's oldest sister looks at him a bit to closely.

Like the previous three short stories in this collection, Rockets' Red Glare is digital only and is available for $0.99.

Posted by Sue Ann Jaffarian at 6:53 AM 3 comments:

Writing On - Not Sure About The Calm 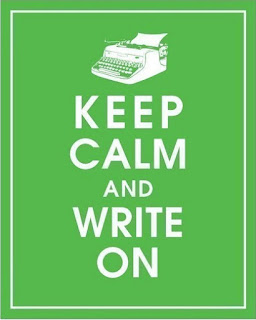 Over on the Criminal Minds blog this week we're talking about the pros and cons of writers having day jobs.  I have a day job. How does it impact my writing? See for yourself in Obstacle Not Barrier.

And since it bears repeating here's a link to It's All About the Math aka why I seldom do book tours.

For many reasons, the two blog posts go hand-in-hand.

Granny News! I have just completed GHOST OF A GAMBLE, my 4th full-length Ghost of Granny Apples novel. This will be my first full novel with Berkley, Granny's new publisher.  GHOST OF A GAMBLE will be out April 2014.  Penguin/Berkley has already published THE SILENT GHOST, a Granny Apples novella for e-readers.  Another novella, DUMMY OF A GHOST, will be released March 2014.

Odelia News! This coming December Midnight Ink will release SECOND HAND STIFF, my 8th Odelia Grey mystery.  Up after that is MURDER BALL, my 9th Odelia Grey novel, which I'll be throwing myself into starting next week. I already have quite a bit completed and it's turning into an exciting ride for Odelia and Greg. And would you believe I've already started work on Odelia #10. It's true!

Holidays From Hell News!  Finally, the 4th Holidays From Hell digital short story is complete and almost ready for publication. Stay tuned for the formal announcement of the release of ROCKET'S RED GLARE in the next few weeks.  Zelda has a new man in her life and she's seeing stars and rockets, but is it the kind of explosion that signals love?

As you can see, I'm Writing On! I'm still working on the calm part.

Posted by Sue Ann Jaffarian at 8:25 AM 4 comments: