Since it's Black Friday, I feel compelled to enter the fray, not as a shopper but as a pitch-woman.

Even if you did not make it to one of my book signings, you can still obtain and give signed copies of most of my books.  Below is a list of independent book stores that have signed copies.  All are located in Southern California, and all have great customer service and will be happy to ship.


Mystery Ink – (714-960-4000)
Prefer e-books and want to support an indie store? You can purchase many e-books from Mysterious Galaxy. Check here for details.

Speaking of e-books, It won't be long before THE SILENT GHOST, the first Granny Apples novella, is released by Berkley, but you can pre-order it now for Nook or Kindle for $2.99.

Click HERE for a full listing of my books and short stories.

Posted by Sue Ann Jaffarian at 9:01 AM No comments: 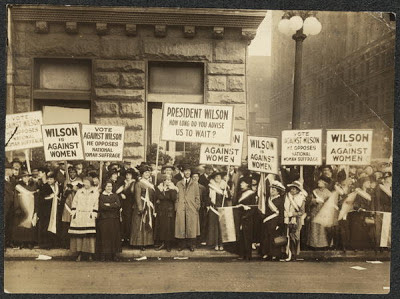 This is the story of our Mothers and Grandmothers who lived only 92 years ago.

Remember, it was not until 1920 that women were granted the right to go to the polls and vote.

The women were innocent and defenseless, but they were jailed nonetheless for picketing the White House, carrying signs asking for the vote. And by the end of the night, they were barely alive.

﻿
Forty prison guards wielding clubs and their warden's blessing went on a rampage against the 33 women wrongly convicted of 'obstructing sidewalk traffic.'


They beat Lucy Burns, chained her hands to the cell bars above her head and left her hanging for the night, bleeding and gasping for air.
They hurled Dora Lewis into a dark cell, smashed her head against an iron bed and knocked her out cold. Her cell mate, Alice Cosu, thought Lewis was dead and suffered a heart attack.
﻿

Thus unfolded the 'Night of Terror' on Nov. 15, 1917, when the warden at the Occoquan Workhouse in Virginia ordered his guards to teach a lesson to the suffragists imprisoned there because they dared to picket Woodrow Wilson's White House for the right to vote.
For weeks, the women's only water came from an open pail.
When one of the leaders, Alice Paul, embarked on a hunger strike, they tied her to a chair, forced a tube down her throat and poured liquid into her until she vomited. She was tortured like this for weeks until word was smuggled out to the press.
* * * * *
In many parts of the world women still do not have the right to vote, or to an education, or are considered nothing but chattel. They can be stoned to death without a trial, sold into slavery, and even beheaded by a male family member.
Remember Alice and Dora and Lucy when you're thinking voting is inconvenient, doesn't matter, or interferes with your life.
And remember, too, the recent words of Rev. Jesse Lee Peterson, a tea party activist who has appeared several times on Fox News, and is founder of an organization for which Sean Hannity serves as an advisory board member.
"I think that one of the greatest mistakes America made was to allow women the opportunity to vote. We should've never turned this over to women. And these women are voting in the wrong people. They’re voting in people who are evil who agrees with them who’re gonna take us down this pathway of destruction."
Rev. Peterson said this in 2012 and being that he is African-American, he has obviously forgotten his roots and how people fought and died for HIS right to vote.
No matter what your political leanings, if you are a woman and you do not vote on Tuesday, SHAME ON YOU!
(A big thank you to my friend Amanda who passed along these photos and information on the suffragettes. And an apology for the mis-coloration of the blog background today. For some reason, Blogger wasn't cooperating.)
Posted by Sue Ann Jaffarian at 8:03 AM 1 comment: