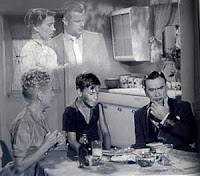 In honor of Halloween, at Criminal Minds this week we're naming our favorite ghost. You might be surprised at mine (the photo to the left is a big hint).

Granny Apples got her nose a little bent out of shape over my post.

Don't be mad, Granny, you're still the ghost of my heart.
Posted by Sue Ann Jaffarian at 6:46 AM No comments:

Wonk It To Me! 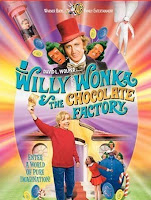 This year is the 40th anniversary of the movie Willie Wonka & The Chocolate Factory. I'm not talking about the creepy Tim Burton/Johnny Depp version (at least I found it creepy), but the wonderful 1971 movie starring Gene Wilder.

Today Willie Wonka & The Chocolate Factory was playing on the Family Channel on TV, and even though I had a To Do List as long as Shaq's leg, I stopped what I was doing and watched it. Of course, I'd seen it before, several times, but there's something special about turning 40, especially if you are a beloved movie starring one of my favorite comic actors.

﻿﻿﻿﻿﻿﻿﻿﻿
A few weeks ago I was watching Top Chef Just Desserts and the actors who played the children in the 1971 movie were guests. The challenge for the chefs was to create an edible and fanciful environment in honor of the movie's 40th birthday. The chefs knocked themselves out with great success. You can catch that episode in rerun if you have On Demand.
Okay, time to get back to tackling housework and the several writing projects crowding my plate. But for 2 hours, it was great to get lost in the world of pure imagination.  Not that I don't do that with my books, but my novels don't have chocolate waterfalls and edible wallpaper. Trust me, I've checked.

A little nonsense now and then is relished by the wisest men. - Willie Wonka
Posted by Sue Ann Jaffarian at 3:10 PM 3 comments:

On Criminal Minds today, I'm listing books that haunt me. For better or for worse, no matter how many years go by, I just can't get something about them out of my mind.

Are you haunted by something you've read?
Posted by Sue Ann Jaffarian at 6:50 AM 4 comments:

Things That Go Bump In The Night - In My Bathroom 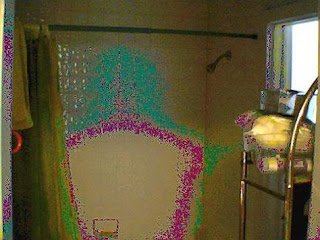 Today I'm guest blogging at Mystery Fanfare's Frightful Fridays, talking about the creepy, cool things that go on in my bathroom.
Come on by and leave a comment to enter to win a copy of BAITED BLOOD - just in time for Halloween!

Seems I'm not the only one with spooks in the powder room.  This photo is of a bathroom in Alabama.

Doctor, I'm Up To My Ass In Alligators Again

I woke up this morning thinking about fear. I didn't wake up fearful or following a bad dream, but as I lounged a few extra minutes in bed cuddling with Raffi (that's a cat, for those of you not in the know), my mind started contemplating the manifestation of fear.

Clowns are a big fear image for some folks. Not for me. Personally, I'm rather ambivalent about clowns. Some are cute, some are creepy. I've been a clown for Halloween in the past and I've clowned around. No problems with either.

If there is one thing that scares the pee out of me it's alligators and crocodiles. Snakes, too. Hmm, guess you could say I'm not too keen on reptiles in general. Years ago, after reading Where Serpents Lie by the very talented T. Jefferson Parker, I had nightmares for weeks. Just mentioning that book's title still sends shivers up my spine. Last week on Dexter, tiny black snakes crawled out of dead body and I nearly latched my fingernails to the ceiling.

My serious fear of snakes aside, it's alligators that cause me to curl into the fetal position and whimper. Even watching them on TV will make me break into a cold sweat. Much as clowns do to other folks. You'd never find me living in Florida. Period. Even if I was guaranteed the creatures were hundreds of miles away and I lived in the concrete heart of a city. I'd have the same issues with Louisiana.

When I'm fearful about something in my life, whether it be a physical threat or an emotional one, those fears manifest themselves into dreams about alligators. In dreams they have chased me across docks, through woods, and once even around a kitchen. When I have a dream about an alligator, I know to stop and examine what is scaring me and why, and I try to work out a way to make the fear go away through resolution. I guess, in a strange way, the dreams do me a big favor. The fear of having more of them, forces me to address my issues head on and quickly.

I don't know where this fear came from or when it started, but my first remembrance of dreams involving maniacal alligators is from my late twenties. As a kid, I went to the old alligator farm that used to be next door to Knott's Berry Farm, and I was fine. No one had to put me down with a tranquilizer gun because I started screaming hysterically. But even then I was suspicious of the creatures. I remember my mother having a shoulder bag when I was very little.  It was made from the skin of a small alligator, complete with the head, claws and teeth. I don't recall that bothering me.

One of my favorite phrases is "up to my ass in alligators."  I use it all the time, especially when I have a writing deadline nipping at me, like now.  I can easily picture my short, chunky legs churning up the pavement as an ancient reptile gives chase, its 10" razor teeth inches from my fat behind. Does it make me write faster? Probably.

What's your fear manifestation: white bread, okra, turtles, kitties? Everyone has them, but not everyone recognizes them.

I just hope one day I don't dream of an alligator coming after me with a clown on its back.
Posted by Sue Ann Jaffarian at 7:39 AM 5 comments:

Dead Nudes in My Future? 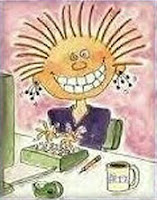 Yes! At least if I have anything to say about it.

DEAD NUDES is the working title of a novel I've been wanting to write for several years now. Next year I don't have quite as many deadlines as I've had in years past, so maybe, just maybe, I'll finally be able to carve out some time to write this story.  You can read an excerpt of it at Criminal Minds.
Posted by Sue Ann Jaffarian at 6:23 AM No comments: