Finally! Time To Put Away the Luggage 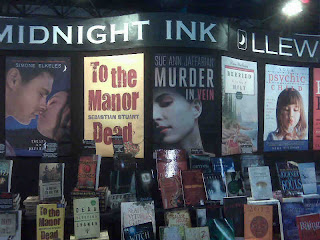 I'm back from Book Expo, which means I'm back from New York. I got into my apartment around 1 am Friday morning and was in bed by 1:15 am so that I could get up and head into the office by 9 am. My plane was 2 hrs late getting out of JFK, but they made up a lot of time in flight and it was only 30 minutes late landing. Good work, Delta (esp. after the disastrous flights I had just a few weeks ago).
In a nutshell, I had a short but fabulous time! But it's now Sunday and I'm still bushed from the back-to-back travel.

Getting off the plane at JFK on Tuesday evening, I easily found my way to Manhattan via AirTrain and Subway E. By 6:30 I was having drinks at the hotel with my agent, Whitney Lee. Later I joined the dashing Sebastian Stuart at The Stage Deli where I swooned over a half pastrami sandwich and a bowl of matzoh ball soup. Following dinner, Sebastian and I walked down to Times Square. The place was packed. I checked my watch. It was 11 pm. It was a Tuesday. I repeat, the place was packed. And it was amazing! Hollywood has some pretty wild billboards, especially along Sunset Blvd., but Times Square has LIGHTS, lots and lots and lots of LIGHTS. No wonder people were up and milling about late on a Tuesday. With all the lights, I'm sure they thought it was the middle of the afternoon.

In the morning, I took a shuttle to the Javits Center and BEA. I found my publisher's booth and was bowled over their display. WOW! There I was, dead center. (See above, and that's Sebastian's new book, To The Manor Dead, just to the left of mine, which I am currently reading).

I had two signings on Wednesday, the first was at 11 am at the main autographing area, where I was seated next to my dinner buddy Sebastian. Later, another pal, Alan Orloff, came in to sign. (BTW, I just finished Alan's Diamonds for the Dead and loved it!) A few tables down was Sarah Ferguson, signing her new book. Of course, her line was around the block and she was swamped with press and photographers. But that said, my line was none too shabby itself and I signed bucket loads of Murder In Vein ARCs. People seemed very excited about my new vampire mystery series, which thrilled me and my publisher to no end. 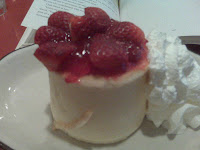 My next signing event was at the Mystery Writers of America booth, where the unflappable Margery Flax and her hubby Steve had things running like a well-oiled machine. There I signed and gave away dozens and dozens and dozens of copies of Ghost a la Mode. When I returned from BEA I was so exhausted I could hardly move. So I did what Odelia Grey would do, I had cheesecake and went to my room for some R&R. (This is an actual photo of my "baby cheesecake.")

Since I didn't have any author duties on Thursday, I ran around NYC playing tourist. My first stop was the World Trade Center site. Even though it looks like any other major construction site, the memory of that morning when the towers fell is still fresh in my mind. From there it was a subway ride to Rockefeller Center and a lovely lunch. After lunch, I walked and walked and walked, drinking in the sights until it was time to grab my bag and head to JFK for my flight home.

As you can see, I had a grand time in New York! But I'm also very excited about something else, the fact that I do not have to pack my bags again until October, when I head to San Francisco and Bouchercon. In fact, I don't even have another book event planned until late August when I'll be heading to Julian for an event at their library.

Not that I'll be lounging around ... Odelia #6 is due just after the 4th of July and vampire book #2 is due October 1st and Granny Apples #3 is due the end of January. Needless to say, while I won't be traveling, my fingers will be flying across the keyboard.
Posted by Sue Ann Jaffarian at 8:20 AM 3 comments:

Carrie Has Her BFFs, I Have Mine

Yesterday was opening day for the movie Sex And the City 2. I know I'll see this movie eventually, but although I really enjoy the antics, problems and wardrobes of the 4 gals from NYC, I probably won't catch it until it comes on HBO.

You see, I have my own BFF to worry about.

I'm talking here about Odelia Grey, the middle-age, plus-size protagonist of my Odelia Grey mysteries. My boon companion, my home gal, the one who started it all for me.

Book #6 in the Odelia Grey mystery series is due to my publisher just after the 4th of July. I have about 1/3 of it written. Yes, you read that right - only 1/3. I've been so wrapped up in vampires and ghosts and travel and deals at work that I haven't given Odelia her due. And believe me, she's in the wings, hands on hips, tapping her toe, barely hanging on to her patience. So now it's time for me to put the pedal to the metal, the flesh to the keys, the gray matter in high-drive. It time to give Odelia the attention she deserves.

Now that I've returned from my trip to NY, I have no book events on my calendar until late August. I have a couple of social events, but no book events. None, nada, nothing. Between now and late August all my book time will be spent writing. I have Odelia #6 due in July and Vampires #2 due October 1st. And let's not forget about Granny. Granny Apples book #3 is due late January. I haven't started it yet, but the story is so clear in my head I can touch it.

So starting tonight, it's just me and my BFF Odelia spending LOTS of quality time together.

To be honest, I think she's even more annoyed that I didn't bring home cheesecake from NY.

Posted by Sue Ann Jaffarian at 7:50 AM 4 comments:

Recaps and Moving Forward aka No Rest For the Wicked 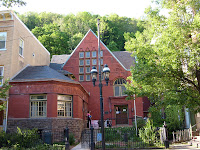 I have been physically and mentally on the run all day today.

Today I have:
written one guest blog
started an essay for a mystery journal
ran several errands all over town
cleaned up my photos from my last trip
sorted receipts from last trip
sorted photos from my professional photo shoot last weekend
sent photos from photo shoot to publisher
updated newsletter list
cleaned up my unread e-mail (over 100)
Before I go to bed tonight I must:
update my website
revise essay
organize my trip itinerary for next week
write this blog
In 3 days I leave for NY and Book Expo America. As with my last trip, I am filled with both excitement and dread. Excited because I'll be spending time with my publisher hawking Murder In Vein to the publishing industry. I'm also excited because I'll be catching up with writer friends I haven't seen in a long time, some I've seen recently, and making new friends. The dread comes from having to get on another plane so soon and interrupt my writing schedule, my day job, and my life. I used to like to travel. Not so much these days. Flying is stressful and uncomfortable. I want to simply click my Crocs together and be in NYC on Tuesday. On Thursday, I want to do the same for the return. I have to be back to work at the law firm on Friday, but at least I'll be looking at a long weekend when I return. 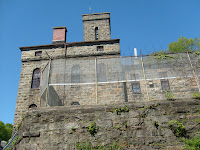 The chore that took the longest time today was sorting photos from my recent trip East and organizing the photos taken at the photo shoot last weekend. I've posted them all to my Face Book page (sorry folks not on FB). My new photo albums contain photos from Jim Thorpe, PA, family photos and new head shots. (above photos: left - library in Jim Thorpe; right - Old Jail)
I had a great time on my trip, but it took me a good week to get back in the swing of things, just in time to leave again. The Malice Domestic conference was a lot of fun, as always. The author event in Oakmont, PA was hectic, but well worth it. The folks at Mystery Lovers Book Shop really know how to get things done.

My short time in Jim Thorpe, PA was delightful. I arrived late in the afternoon and was able to get a lot of great photos before the sun went down. I had an Irish beer and fish and chips at the Molly McGuires Pub before retiring to my room at the Inn at Jim Thorpe, which was small but comfortable and furnished with antiques. The next morning, after a fabulous breakfast at the Albright Mansion, I headed up to the Old Jail for a private tour and chat with owner Betty Lou McBride. If you ever get to Jim Thorpe, you must take the Old Jail Tour. It was absolutely fascinating and oh so very creepy!
The weather was fabulous for my drive through Pennsylvania and up into New England. I ran into a few thunderstorms but they cleared up quickly. My time with my family was short but lovely. Since I last visited, my niece Lindsay and her husband Eric have had two darling girls. We also celebrated another great niece's 7th birthday while I was there. I even managed to squeeze in two book signings. They both went well considering the day of the signings it POURED almost nonstop.
Once home, I had my new head shots done. I am very pleased with my new photos. They were taken by the very talented Innis Casey (www.InnisCaseyPhotography.com). My make-up was done by miracle worker Kadi Dugan. If you're in the LA area and need professional head shots done, definitely get in touch with these folks. 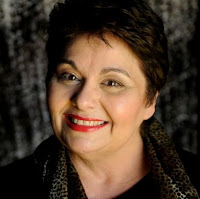 But today wasn't all work and no play. I started off the day with a leisurely brunch at Grub, a fun restaurant in Hollywood and favorite place of mine. One of the owners of Grub is Betty Fraser, a former Top Chef contestant. While chowing down on Grub's Oh La La Egg Sandwich, I enjoyed the sunny patio and stuck my nose in a book. That is heaven to me.

Well, the clock is ticking and I still have chores to do before bed. On the agenda tomorrow:
groom B
do laundry and pack for NY
finish essay
clean and vac apt.
go through mail
TRY TO GET SOME WRITING DONE ON ODELIA!
Posted by Sue Ann Jaffarian at 10:04 PM No comments:

Last Whistle Stop of the Season

With the exception of attending Book Expo America in NY in two weeks, this Sunday is my last official panel and book signing until late August. So come on down and say hello. Considering the fun gals I'm teamed up with, I guarantee you'll have loads of laughs.

After this event, I'm putting my nose to the writing grindstone for several months. Odelia #6 is due just after the 4th of July and the 2nd vampire mystery is due October 1st.

I got me some writin' to do!
Posted by Sue Ann Jaffarian at 6:45 AM No comments:

Readers - This One's For You

I've posted a love letter to my readers over at Inkspot today.
Posted by Sue Ann Jaffarian at 10:34 PM No comments: