Come On, I Know You're In There

I'm struggling to write Hot 'n Haunting, the 2nd book in the Ghost of Granny Apples mystery series. It's not that I don't know what the story is. I do. It's not that I'm not spending time in front of the computer. I am. And it's not like the characters in the book aren't cooperating. They are. Even the ghosts.

What I've written so far, I like. So do the couple of readers I use as guinea pigs. But for some reason the remaining words are coming slower than usual. It's like there's a disconnect between my brain and my fingers. Like pulling an elephant through a keyhole. Like stuffing size nine feet into size 6 shoes. Like coaxing a cat into a bath.

It's not writer's block. I know exactly what I want to say, I just can't seem to get the words to make the trip to the page.

Maybe I need to bait the words, like leaving cheese in a mousetrap. Maybe I can tempt them out with promises of something good and yummy. But what do you offer words stuck in the brain?

Come out and I'll give you a ... New hat? A Dove Bar? A pedicure? What will it take for you to come out of hiding and take your rightful place in the manuscript? Tell me. What? Name your price. Whatever is in my power to deliver, o' shy words of fiction, tell me and it's yours.
Posted by Sue Ann Jaffarian at 8:05 AM 5 comments:

For instance, I spent over six hours yesterday just overhauling my website. It was in sore need of a makeover since I hadn't updated it since God wore short pants. I've been wanting a spiffy new website for some time, but with the economy the way it is, decided in the end to do it myself. Six hours on the website meant six hours in which no writing occurred. But as with any business, a website is my storefront to the world and until yesterday my display window looked a lot like I was going out of business.

After, it was on to the updating of my calendar for the rest of 2009. Also something that had to go on the website, but put into my physical calendar, as well. In looking at my calendar for the last five months of the year, I wondered: When in the hell is any writing going to get done? But it will. It has to, bottom line.

I also organized and answered e-mails and cleaned out my e-mail account of stuff I didn't need. Created folders on the computer and sorted documents and photos for ease in finding later. This is still not complete, but after spending nearly 10 hours on the computer yesterday, I pulled my weary eyes away for the rest of the day. Then I watched several hours of guilt-free TV and did a few physical chores.

I hate housework, both the writing kind and the house kind. But both need to be done and both never seem to get done fully and to my satisfaction.

To Puke or Not to Puke

I'm over at Inkspot today talking about running a writing marathon - aka writing 2 novels a year.
Posted by Sue Ann Jaffarian at 12:03 AM No comments:

Perk Up Your Mid-Week

This coming Wednesday, July 22nd, join me and the very talented John Shannon for An Evening of Mystery presented by the Cerritos Library. The program starts at 7 pm in the Skyline Room (18025 Bloomfield, Cerritos, CA).

The Cerritos Friends of the Library always present an outstanding program, so perk up your hump day by coming down and spending a little time with us.

Trust me, you're gonna love it!

Posted by Sue Ann Jaffarian at 8:20 AM No comments:

We're half way through the summer but there's still time to enter "How Odelia Spent Her Summer Vacation." We've had several entries, but need MORE, MORE MORE!

Don't be left out! You can enter as often as you like.
Enter How Odelia Spent Her Summer Vacation and Win a Signed Copy of Ghost à la Mode!

To enter – take a photo of any cover of an Odelia Grey novel in someplace interesting or doing something fun this summer and forward it to contest@sueannjaffarian.com, along with a very short explanation of the photo, and your snail mail address.All entries must be in a suitable and common format (i.e., jpg) and become the property of Sue Ann Jaffarian upon entry.

Contest will run from May 16 through September 15, 2009. Entries received after September 15, 2009 will not be considered. Three winners will be chosen and their names and photos will be posted on Babble ‘n Blog a week after contest closes.

All entries must be made via e-mail. No snail mail entries.Be original and creative. Put yourself into the photo, if possible. When sending photo, explain where it is and what you are doing – don’t make me guess. Do not be vulgar or obscene. Do not depict anything illegal (i.e., Odelia should not be holding up a bank, etc.)

Everyone have a fun summer with Odelia Grey and her friends.
Posted by Sue Ann Jaffarian at 2:20 PM No comments:

I have decided that America's Got Talent should be renamed America's Got More Freaks Than Talent. This show is one of my (many) guilty pleasures. When the new season started a couple of weeks ago, I eagerly planned my dinner time around its time slot so not to interfere with other stuff I do - like writing.

Is it just me or does this season seem to have more misses than hits. I mean, I just don't get it. How can some of these people actually think what they do is a real talent. (Though I'm sure there are some readers out there who think that about my books.) 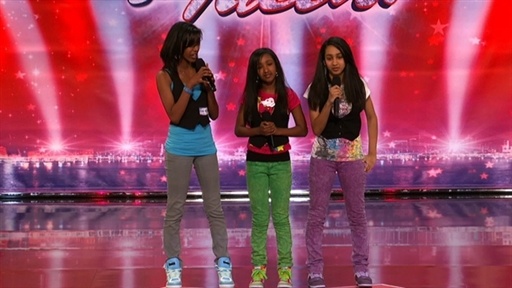 So why do I keep watching?

Because amongst all these train wrecks can be found gems that make all the pain worth while. EriAm, The Voices of Glory, Barbara Padilla, Acrodunk, Thia Megiam, Lawrence Beaman just to name a few who got me cheering. And this season there are a lot of talented kids on stage, not just a couple. I love watching talent's first bloom. Don't you? And for talent on the other end of the circle of life, you have to catch Grandma Lee.

Okay, enough ranting. Now let me do some raving.

Yesterday, Abigail Wong, a friend and one of the attorneys at my office, turned me on to a new blog site. It's simply called Margaret and Helen.

It was love at first read.

Now if your first impression is that this is a blog about cats and crocheting, think again! This blog is a gutsy commentary on politics and social issues. It's refreshing, honest,and well written, and will make you laugh as it makes you think.

Example from "Don't Cry for Me Argentina": Is there something special about a Republican tallywacker that it requires so much attention?

I Just Don't Get It and then Some I SWORE I wasn't going to write anything about Michael Jackson. But I'm going to break that oath and say this ... I'm certainly thrilled (as opposed to Thrillered) that I do not work in downtown Los Angeles! Today is going to be a nightmare for the folks who daily fight normally horrible traffic.

But what I want to know is: Who in the hell is paying for all the extra police, security, traffic control, etc. needed to manage the hundreds of thousands of people expected to crowd into LA for today's memorial at The Staples Center? The financially strapped city of Los Angeles? The breadline bound state government of CA? CNN reported that the city will be footing the bill for the law enforcement needed to handle today's mass of mourners. MY taxes are paying for crowd control for an event I think is over the top even by Whacko Jacko standards.

I know Jackson was a world-class entertainer. I know he was beloved by millions (though I'm not among that number), but come on folks! He was an entertainer ... a fucking ENTERTAINER. And one with questionable personal behavior at that. He didn't discover the cure for cancer. Or stop world hunger or genocide. As far as I can tell, he lived a very self-centered, self-indulgent life. I just don't understand why all the adoration and idol worship. Are we that hard up for role models? Or are we just that decadent in our standards?

Personally, I think the memorial should have been held at the Neverland Ranch at the expense of Jackson's estate. At most of the funerals and memorial services I've attended, the mourners usually gathered back at the home of the deceased for sandwiches and coffee. I'm sure Jackson and his family could have afforded it a lot better than the government.

Above photos: Homeless people in downtown Los Angeles. Where is their non-stop news coverage?

Addendum:
This from CNN.com today:

The total cost for security at the event is estimated to be between $2 million and $4 million [emphasis added], said Matt Szabo, spokesman for Los Angeles Mayor Antonio Villaraigosa.

The city, in the midst of a budget crisis, will foot the bill, said Councilwoman Jan Perry last week. But it needs help. By the time the memorial begins, about 3,000 officers will be at the Staples Center site, police said.

This from Los Angeles Times June 16, 2009:
Los Angeles City Council President Eric Garcetti said this morning that it appeared that enough private donations had been pledged to cover the city's costs for Wednesday’s parade to celebrate the Lakers’ NBA championship.

Several council members had voiced opposition to spending any tax dollars on the parade because of the city’s financial crisis, which is expected to lead to widespread layoffs and worker furloughs starting in July [emphasis added].

Council members Jan Perry and Bernard C. Parks today filed a motion authorizing the Lakers’ parade, but only with the understanding that “event sponsors will reimburse the City for all fees and costs associated with this event," including police protection and other staffing necessary for city street closures.

Is it just me or should the Jackson estate be held accountable for the monies being spent today? People are losing their fucking jobs and the city is paying $2-4 million for security for one event that is not even a city sponsored event.

As a tax paying Angelino, I am OUTRAGED!
Posted by Sue Ann Jaffarian at 7:22 AM 8 comments: