Keeping Time with the Music

This morning I walked another 5K. Since the Mud Run is only one year away, it's important for me to get my cardio built up. My goal is to walk 3-4 of them a week for now, maybe 4-5 a week later. I don't plan on tackling a 10K walk until August or September. 1) It takes more time and I'm on a big deadline right now; 2) I'm not ready for that distance yet. Eventually, as more weight comes off (I've lost about 25 lbs now), I'll start to jog part of it.

However, this morning I did something different. I took my tunes with me. As much as I love music, I'm not a big music-holic. I don't follow any specific style or performer or group. I just like what I like and what fits the moment. Some authors listen to music while they write. I cannot. I find it too distracting, even if it's a light and lovely classical piece. In the past, I've never even listened to music while I walked. Usually, I use my exercise time to think about plot twists, dialogue and red herrings. And, of course, when I walk with friends, I spend the time gabbing.

Armed with my iPod Shuffle and tunes especially chosen to get my feet moving, I hit the road this morning at 6: 10 a.m. What a difference! I definitely moved faster, even shaved 5 min off my usual time. My legs kept time with the music. I was less focused on how tired and hot I was getting with each step, and the miles flew by. Before I knew it, I was almost home.

What do I listen to on the road? Some of my get-my-ass-moving favorites are:

I Want to Know by Marc Anthony

Eye of the Tiger by Survivor
Respect by Aretha Franklin
Proud Mary, The Best and What's Love Got To Do With It by Tina Turner
It's Still Rock and Roll to Me and Only the Good Die Young by Bill Joel

But the best tune came at the end when I rounded the corner and saw my apartment building just 1 block away. Yes, it was [ insert drum roll] the theme from Rocky (Gotta Fly Now). And I swear I didn't plan it that way. Talk about timing! When I hiked up the 3 flights of stairs to my apartment, I almost felt like raising my arms high in the air and dancing.
I said almost.

Posted by Sue Ann Jaffarian at 7:31 AM No comments:

Too Pooped to Pop

I think it’s safe to say I got my fair share of exercise this weekend, a weekend with above-average temps in Los Angeles.

Saturday I met new friend Carrie to walk 5K. Like me, Carrie is on a mission to lose weight and participate in the 2009 Camp Pendleton Mud Run. We didn’t know each other before this quest. Carrie was doing an Internet search about the Mud Run and stumbled upon my blog post about it. We connected, and now are training pals. She’s super. A mother of teens and a veterinary technician, Carrie has already lost 65 lbs of her 100 lb weight loss goal. She’s a true inspiration to me.
As if Saturday's 5K wasn't enough, on Sunday I was drafted to play softball. Yes, me! You can read all about that adventure on today's Inkspot.
I gotta lay down. I'm pooped.
Posted by Sue Ann Jaffarian at 9:53 PM 2 comments:

Yesterday afternoon I received a very pleasant surprise by e-mail. An agent from a major production company and agency here in Los Angeles queried me about the dramatic rights to my Odelia Grey series!

I'd met this agent before, about a year and a half ago, at the Los Angeles Times Festival of Books. At that time, my novel Too Big To Miss did have an option on it. But as with many options, it went by the wayside during the recent writers strike. Now it looks like there is interest again. Yea!

I've turned this over to my energetic agent and will keep you posted.

Meanwhile, sales are still brisk on all of my Odelia Grey books. Thank you, everyone! And The Ghost of Granny Apples is coming along nicely. Only 57 days until Granny is due to my publisher. Mush!
Posted by Sue Ann Jaffarian at 6:48 AM 1 comment:

Last night, Weeds, my favorite TV comedy, returned for it's 4th season on Showtime, and it did not disappoint. I rushed home from work to catch the 7pm showing so I wouldn't have to wait until 10pm. I nuked a Lean Cuisine pizza and settled on the sofa with dinner and the cats and soaked in every bit of this quirky, irreverent, and beautifully written show.

This season the show made a drastic change by taking Nancy Botwin and crew out of the suburbs to a fictional beach town situated near San Diego. Most of the 30 minutes of the first episode involved the set-up for the change and left me wanting MORE and NOW.

Also this season, several favorite characters are gone, but the legendary Albert Brooks has joined the cast as Nancy's father-in-law. As always, he was brilliant.

As I've blogged before, I love the shows on the cable channels, but this is my absolute fav. It's my Cherry Garcia in a world of vanilla. It's so well written and the humor so cutting edge that I come away from the tube humbled, and not just a little like a hack with regard to my own writing.

Geez, it's a long time until next Monday!
Posted by Sue Ann Jaffarian at 6:06 AM 1 comment: Okay, who shrunk the ice cream when I wasn’t looking?

Tonight at the grocery store, I decided to buy some ice cream. My absolute fav brand is Ben & Jerry’s, Cherry Garcia and Phish Food, in particular. But tonight I decided to buy my 2nd favorite brand, Dreyer’s (or Edy’s to you folks in the East). There were two reasons for this abandonment of Vermont’s finest: 1) they had spumoni, another favorite flavor that’s not often in stores; and 2) it was on SALE. I could get a whole half gallon for less than a pint of B&J. Such a deal!

But wait! What’s happened to the ice cream carton? At first I thought my eyes were playing tricks on me. After all, it had been awhile since I’d bought a large container of ice cream. But no! My eyes had sized up the carton with precision. It was not only redesigned, it was smaller than it used to be! Something that was confirmed when I read the product information. The “half gallon” container contained merely 1 and ½ quarts of cold and creamy delight. I checked the other brands and they, too, had recently undergone reduction surgery. I guess instead of raising prices, the various ice cream companies simply reduced the size of their package, giving us less for the same price instead of the same amount for a higher price.

But here’s the thing. A “half gallon” of ice cream not really being a half gallon in size just doesn’t seem right. I mean, it’s awkward.

“Hey, honey, while you’re at the market, pick up a quart and a half of rocky road.” 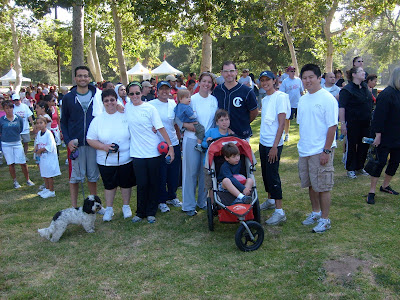 This past Saturday, Hooper's Troopers, hit the trail at Griffith Park. The objective: to walk a 5K and raise money for the Los Angeles Ronald McDonald House. Our team was made up of employees, and friends and family of employees, of the law firm where I work, and included Zeus the dog (see photo above). It was a beautiful day and spirits were high. And we're pleased to report that Hooper's Troopers raised $1,000 for the Ronald McDonald House in Los Angeles. 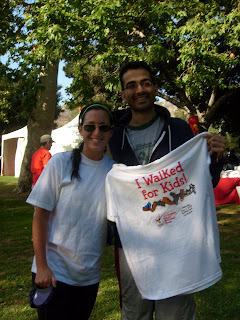 Left - Alexandra and Akshay show off the event T-shirt. 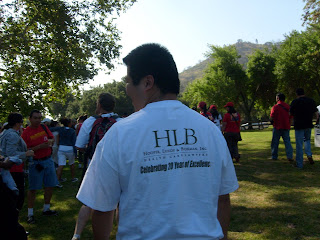 Left - the startling line. Below, Hooper's Troopers ready to roll. 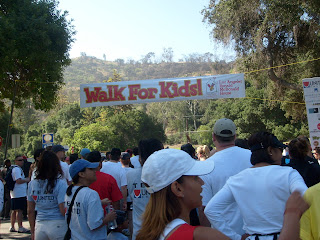 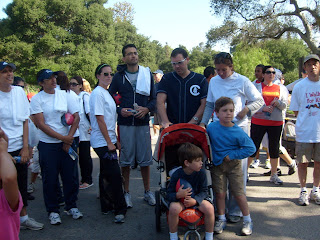 Below - walking through beautiful Griffith Park in Los Angeles. 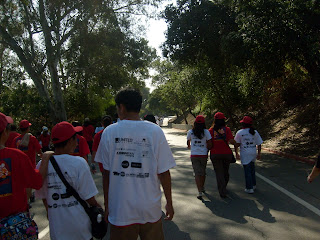 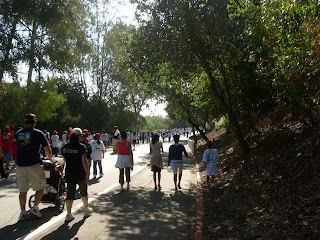 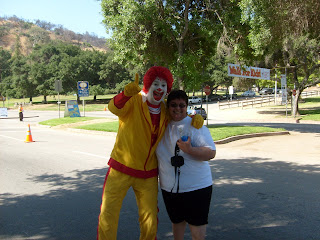 And, of course, our host - Ronald McDonald
Posted by Sue Ann Jaffarian at 11:05 PM No comments:

Cozy Up with S-E-X

The fine ladies and authors over at the Cozy Chicks Blog have invited me to be a guest blogger today. Come on over and visit.

Pssssssssst ... I'm talking about S-E-X.
Posted by Sue Ann Jaffarian at 6:01 AM No comments:

Okay, I seem to be noticing really bizarre things lately, or is it that normal things are striking me as bizarre. Whatever, this morning, while I was getting dressed for work, I heard an advertisement on the radio for plastic surgery. The ad was for a "boob job combo."

Seems, here in Los Angeles (need I say more), you can get a "boob job combo" for $6,500. That would include a boob job and another procedure. All for the low price of $6,500. Seems that while gas, food and rent are skyrocketing, boobs are being put on sale.

What a country!
Posted by Sue Ann Jaffarian at 8:59 AM 1 comment:

Two of my Midnight Ink colleagues and friends were recently honored with nominations and awards.

First, Tim Maleeny won a bronze IPPY for his Stealing the Dragon. And don't miss the second book in his Cape Weathers series, Beating the Babushka. I loved both books.

Next, Felicia Donovan was just nominated for a Barry Award for The Black Widow Agency. The second book in Felicia's series, Spun Tales, has just been released. It's on my TBR list.

And while I didn't win any awards or get nominated for one, Reader Views just released a fabulous review of Thugs and Kisses.

And, by the way, I haven't forgotten about my looming deadline for The Ghost of Granny Apples. I'm working as fast as my fingers and brain can fly. It's due to Midnight Ink in just 70 days!
Posted by Sue Ann Jaffarian at 5:51 AM 1 comment:

This Saturday, June 7th, I am walking in my very first 5K charity walk. It's to raise money for the Los Angeles Ronald McDonald House, a wonderful charity. Our law firm has a team, Hooper's Troopers, and the firm is donating $50 for every employee who walks!

But let's not stop there!

If any of you would like to sponsor my sorry fat behind in this endeavor, you can do so by going to my personal page on the event site.

See you at the finish line!

Link on over to Inkspot to read about my experiences at Book Expo America this past weekend.
Posted by Sue Ann Jaffarian at 7:29 AM No comments:

The Toting of the Green

My niece Lindsay sent me a fun and useful link that I thought I'd pass along.

Teresa, the Green Bag Lady from Nashville, will send you a bag for FREE. You just have to promise to use it instead of paper or plastic bags. Go to her blog site to order yours, and to see the bags and people using them.

Kudos to Teresa for changing the world one bag at a time!

I'm writing her now to get mine!
Posted by Sue Ann Jaffarian at 7:15 AM No comments: